Coming from Wisconsin, we really know how to make men’s jackets and coats that will keep you comfortable whether it’s wet, dry, mild or wild! 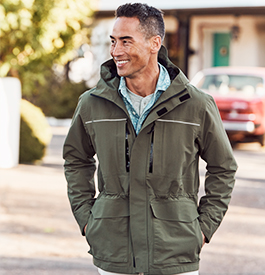 If you've just finished at the gym and are headed back out into the early morning chill, throw a mens quarter zip fleece pullover on over your men’s workout clothes after you've worked up a sweat. A mens fleece pullover makes a great warm layer when sitting around a campfire, too. Zip it up to the neck for added warmth and then zip it back down once you've got the fire roaring. A men’s fleece pullover is the versatile topper you need in your cool-weather wardrobe, perfect for everyday wear. Lands' End mens fleece comes in classic dark colours just right for hard use in the great outdoors. Further, Land's End fleece garments are made of state-of-the-art fleece that resists pilling, stays colourfast even after many machine washes, and resists static cling. That means that when you pull your mens fleece gilet out of the dryer in the morning, no one is going to pluck an errant sock off your back later in the day.

Regular fleece has a smooth and soft finish that feels great against your skin, though it’s most often layered over a men’s T-shirt. Sherpa fleece has a slightly bumpier texture for a more rugged look. Whatever your style, you can rely on a mens fleece jacket from Lands’ End to last season after season. Pair a mens quarter-zip fleece pullover with a puffy down vest when you don't want the bulk of a winter coat—just right for horse riding or other outdoor activities. Combined with men’s jeans, you have a casual and versatile outfit that is extremely attractive, too.

Mens fleece outerwear makes a great gift for the hard-to-shop-for man in your life; everyone appreciates a soft piece of clothing that says, “I want to keep you warm.” Browse Lands' End to select a men's coat or jacket today.